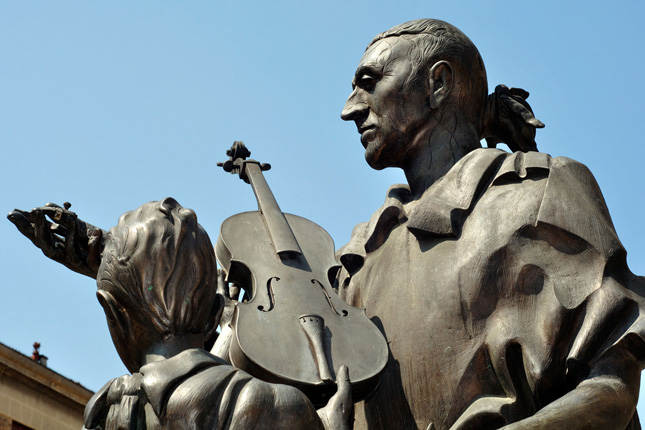 Who taught Antonio Stradivari the art of violin making?

Who taught Antonio Stradivari the art of violin making? Born in Cremona, between the end of 1643 and 1649, he is universally recognized as one of the greatest luthiers of all time, known for making strings of extraordinary workmanship such as violins, violas, cellos, guitars, and harps. Yet there are no written documents or certain proofs that attest to the training path that led him to such skill.

The results of the dendrochronological research conducted by Mauro Bernabei of the Institute for Bioeconomy of the National Research Council (CNR-IBE) on a harp signed by Stradivari and preserved at the San Pietro a Majella Conservatory in Naples, now provide interesting clues about the apprenticeship of the great luthier.

According to the tradition, Stradivari was a pupil of Nicola Amati, the oldest luthier whose workshop was very famous when he took his first steps in this art, but his name does not actually appear among the students of the oldest artisan. The dendrochronological analyzes conducted on two instruments of the respective luthiers, whose data were published in the journal "Dendrochronologia" edited by Elsevier, show that both used the wood of the same tree, a clue that strengthens the hypothesis of Stradivari's frequentation of the workshop by Amati.

"The analyzed instrument is a small portable diatonic harp, dated to 1681, the only one built by Stradivari to have come down to us, and is a 'unicum' among the approximately 550 surviving instruments of the Cremonese craftsman", explains Mauro Bernabei of the Cnr-Ibe. "On the column it bears the inscription 'Ant: Stradivarius Cremonen.s F. 1681'. During the dendrochronological analysis it was observed that the rings analyzed matched perfectly with those of a cello built in the same years (1679) by Nicola Amati. This means that the wood of the soundboards of the two instruments had been obtained from the same trunk".

It remains of particular interest that the only evidence of a possible link between the two luthiers is found in one of Stradivari's first instruments, "the violin called 'Serdet', whose label bears the inscription 'Antonius Stradivarius Cremonensis Alumnus Nicolaij Amati, Faciebat Anno 1666', a label that has been questioned several times. The dendrochronological analyzes ”, continues Bernabei, “now tell us of an exchange of the same wood between the two luthiers, or rather of a very close contact, which can lead to the hypothesis of frequenting the same workshop. Nevertheless, it certainly cannot be said that the mystery of Stradivari's apprenticeship is now solved. The results obtained, however, fit into a broader framework and reinforce some considerations. While there is no documentary evidence, it is reasonable to assume that having been born in Cremona or nearby, no one better than Nicola Amati, the most famous and talented luthier of the time, who lived and worked in his own city with a thriving luthier workshop, would have could have been his teacher. This is what tradition handed down to us and what Stradivari himself wrote on the "Serdet" violin. Now, the results of scientific analyzes reinforce these considerations”, concludes Bernabei.