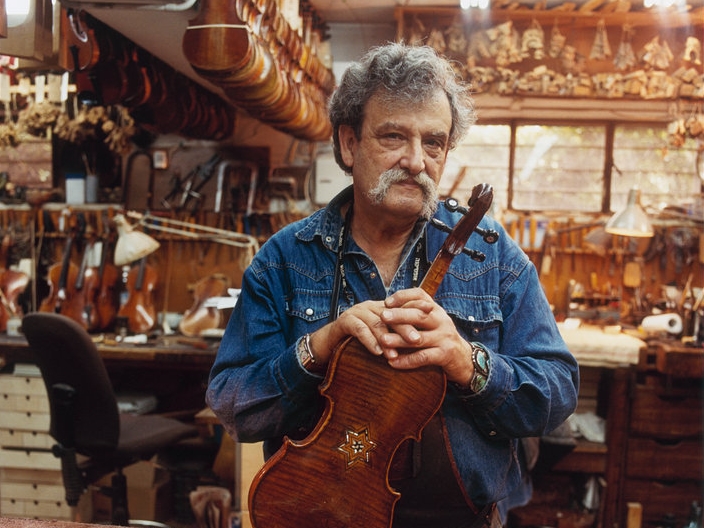 A. Weinstein, the founder of “Violins of Hope”: “There are no words to explain the Holocaust. This is my contribution to understanding”

Among the great protagonists of Cremona Musica 2019 there is Amnon Weinstein, the Israeli luthier who is moving the world with his collection of violins which belonged to victims of the Holocaust, “Violins of Hope”. Over the last decades, Weinstein has collected 79 violins, telling their stories and restoring them, in order to make them fit to play again in the most prestigious theaters in Europe and in the World. During Cremona Musica we will see an exhibition of a selection of these instruments, that will also be played in concert by the Turkish violinist Cihat Askin. We talked with Amnon Weinstein to know more about his project and its history, waiting to meet him in Cremona (where he also studied, at the School of Lutherie, in 1961).

Let’s start from the name of the project: why “Violins of Hope”?

The title of the project evolved as we went along. Many people who played these violins in concentration camps or in ghettos survived the war and gave us the instruments – so we can tell their survival stories. The message is that violins helped people to live, and they had a very special role in the lives of these people, who went through the most brutal era in the history of mankind.

How did you start this project and when did you realize it would become so important?

The first violins were collected by my father. The story is very interesting. In 1936 Jewish violinist Bronislav Huberman, who lived in Berlin, realized that it was dangerous for Jews to stay in Europe. He encouraged musicians to leave Europe and so he established the Palestine Philharmonic Orchestra in Palestine.  He auditioned many of the most important Jewish musicians in Europe and this proved to be a great success.  The newly formed orchestra was conducted by M° Arturo Toscanini. Many musicians from Germany, Poland and other countries brought with them instruments of the best quality, most of which were made by German makers. But in 1945, after the horrors of the Holocaust, Jewish people boycotted German made goods, among them violins and other  string instruments. My father, Moshe, bought many of these German violins, because the owners wanted to destroy them, and this was sacrilege to him. In 1991 one of my pupils, the German bow-maker Daniel Shmidt, found the collection of excellent violins in my workshop and asked me to give a lecture about German string instruments to the German Association of violin and bow makers. I refused, as they reminded me of terrible memories. Daniel insisted and finally  convinced me to do so in the annual convention in Dresden. Following this lecture I spoke on Israeli radio and asked people for personal stories and instruments from the Holocaust. This triggered a snowball effect, and I received dozens of instruments which I restored and treated as holy relics, doing my best to make them sound beautifully! Soon enough we organized concerts in Istanbul, Paris and then - in the USA. Now the collection includes 79 instruments and I have concerts scheduled until 2022. I would never have expected that it could become so important.

Every instrument has a story, can you tell us some of them?

We have a violin which was played in the male orchestra in Auschwitz, where people were sent to the gas chambers. Another violin was thrown out of a train window in Lyon, France. Yet another was buried in a garden in Amsterdam. Each violin has a soul and a story of survival. Many have sad stories of death, so they are the only reminders of lost families. We also have a collection of violins decorated with lovely Stars of David, which were used by klezmers – popular violinists. Inside one violin we found a swastika and the inscription: “Heil Hitler”. This was done by a Nazi luthier while the owner did not realize it!

What does this exhibition show us about the importance of music and musical instruments?

Today we cannot understand the importance of music in that period. Playing, even in small contexts and small concert halls, was a very moving moment, a half-hour of relief in an unbelievable horror. In Auschwitz, there were eight orchestras, that played when people went and returned from work. Playing was a kind of prayer, as much Jewish music is inspired by prayers. In many memories, people describe how emotional it was playing in the ghettos too. The first violin I repaired was played while the prisoners went to the gas chambers. Listening to that same sound today, the last sound ever heard by those people is now very emotional. Violins give taste to life, and I think I am really lucky to give new life to these instruments.

“Violins of Hope” send a message of tolerance, but in the last years, we still witness a raise of intolerance all over the world. What do you think about it?

My wife comes from a famous family of partisans. I buy and read every book about the Holocaust I can find, but I cannot understand how people can be so mean with other people, also when talking. With Jews, with Muslims, with anybody. I do not understand how racism can exist today. “Violins of Hope” is my contribution to try to make people understand what happened in that period, even if it is impossible. There are no right words, in any languages, to explain the Holocaust, we will need thousands of years to totally understand that period.

How do you feel about being at Cremona to receive the Cremona Musica Award?

When I went to Cremona to study, I felt at home. I will never forget that period of my life, it was a dream coming true. I studied at the School of Lutherie of Cremona in 1961, with some of the best Italian luthiers in history. When I was told that Cremona Musica wanted to give me this prize I could not believe it. My Italian is not good enough to describe how important it is to me. It reminds me of the first time I crafted a violin with my hands, an emotion that is comparable with restoring a violin that had been in Auschwitz in order to make it play again in the most important concert halls.